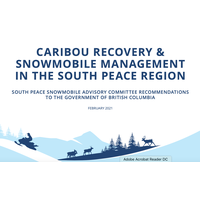 Keremeos, BC (February 3rd 2021) -- The Central Group of Southern Mountain Caribou have been listed as threatened under the federal Species at Risk Act. The Government of British Columbia, Government of Canada, West Moberly First Nation and Saulteau First Nation developed and endorsed the Intergovernmental Partnership Agreement for the Conservation of the Central Group to the Southern Mountain Caribou (Partnership Agreement) on February 21, 2020. This agreement sets out the actions that the signatories will take to achieve the shared recovery objective of “immediately stabilizing and expeditiously growing the population of the Central Group to levels that are self-sustaining and support traditional aboriginal harvesting activities, consistent with existing Aboriginal and Treaty rights”.

Many of the most popular snowmobiling areas in the South Peace overlap important caribou habitat. Though not the primary driver of caribou population decline, snowmobiling can create undesirable impacts on caribou by disturbing or displacing animals to lower quality habitat.  Recognizing this, the Partnership Agreement committed the province to Clause 37 which outlines the commitment for the consultation of technical experts, first nations, local governments and snowmobile clubs to inform the design and implementation of a winter motorized recreation management plan to mitigate disturbance and displacement of caribou. This clause created the South Peace Snowmobile Advisory Committee (SPSAC) and enabled it to be involved with the development of management options for winter motorized recreation access.

The BC Snowmobile Federation recognizes the importance of snowmobiling not only to the lifestyles of British Columbians but also the economies of rural communities. Areas within the scope of this report are no exception to this and are consistently rated as some of the best snowmobiling areas in Canada. The tourism potential of the region for winter recreation has yet to be realized.

The BC Snowmobile Federation believes that the attached recommendations developed by the SPSAC show a strong desire to recover caribou while maintaining quality opportunities for snowmobiling in the South Peace.  The data reviewed during the creation of this report included current herd data and habitat usage for the last five years to ensure that recommendations were current and relevant.  The Committee felt strongly that Adaptive Management needed to be a core principle of any management plan going forward to ensure that changes in landscape, herd movement and snowmobile usage can all be reviewed regularly.

Now that the SPSAC report has been delivered to the decision makers we hope that our recommendations will be given weighted consideration in the development of the winter motorized recreation management plan for the region.  This plan is a small part of a much larger and complicated recovery plan needed to help the Government meet its objective of creating self-sustaining populations of caribou to support traditional aboriginal harvesting activities.  Managing snowmobiling alone will not achieve this objective but the BC Snowmobile Federation Clubs will continue to be leaders in caribou recovery and support the province in its efforts to restore Southern Mountain Caribou to self-sustaining populations across British Columbia.

The BC Snowmobile Federation is a non-profit society created in 1965 to establish, maintain and protect quality opportunities for organized snowmobiling in BC. The BCSF collectively represents 60 snowmobile clubs and 44,000 riders in the Province of BC.  On the ground, our member clubs are non-profit societies maintained by caring volunteers who promote safety, stewardship, and responsible backcountry snowmobile recreation.