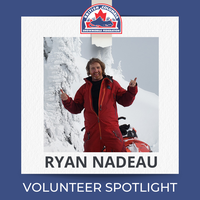 Chief volunteer, face of the organization, the glue that holds the club together... these are just a few of the subtitles you may see listed beside the role of Snowmobile Club President. In BC, snowmobile clubs operate as Not-For-Profit Societies bound by legislation called the Societies Act. The Act works in conjunction with a club's own constitution and bylaws as voted by the members. These societies are governed by a Board of Directors. At the helm, the President wears many hats and plays equal parts leader and listener to keep the organization on track. We sat down with Ryan Nadeau, President of the Powder Mountain Snowmobile Club in Whistler, BC to learn about his journey as an avid outdoorsman and backcountry skier thrust into the snowmobile world as an inadvertent club president.

Q: Ryan, the Powder Mountain Snowmobile Club had found themselves in a land use battle that required a leader with some specific skills to navigate their way through the storm. Can you tell us a bit how you became entangled in this net?

I became involved with the snowmobile club when there was a threat of closing Mt Sproatt. There had been long standing tension between the non-motorized community and the snowmobilers. It was essentially a fight over powder. But the forward-facing conflict was over potential impacts on the community watershed as leverage to try and force a closure of the whole mountain.  I followed the issue and volunteered time to assist the snowmobile side preserve public recreation access. They had been leading efforts for a while, but the threat of closure kept getting worse. It eventually came to a head with Rec Sites and Trails threatening partial or complete closures.

One night, I showed up early to a snowmobile club meeting about the topic because I worked nearby.  The club was having a directors meeting first and I was invited to join. I had a few suggestions on things they could do because of my work history in land development, and they immediately attempted to get me to join the club board. I continued to get more involved in the specific fight to keep the area from being closed and was eventually drafted into the “working group” for sea to sky winter motorized recreation land management. We were ultimately successful in defending against the closure.

The club president at the time, a man in his mid-70's, was an original founder who had come out of retirement to provide interim leadership during all this. He movingly pointed out that he was "too old for this, and it's time for some of you younger folk to step up". I was expecting my first child within months so, while hesitant to take the role on, felt uniquely qualified for the job at hand.  My previous experience in land development, working with government stakeholders, and running jobs as a project manager was an asset. Having deep roots in the local community as a skier, I was able to speak the language and knew the players on the non-motorized side of the argument. So in late 2018 I took on the role as President of the Powder Mountain Snowmobile Club.

Q: Clubs across the province as similar in many ways, yet are also so different. Describe what the role of President at Powder Mountain is like for you.

My role within the club is fairly diverse. I attempt to mostly delegate tasks within the group of volunteers we have. Anything that I specialize in I will take on myself.  I exclusively tackle the negotiations with Rec sites and Trails / Forests Lands and Natural Resource Operations around land management.  I also specifically take on summer road maintenance planning and oversight. My experience in construction/development translates well to preparing scope of work documents, dealing with approvals, as well as planning what work needs to be done and getting it executed by contractors.

We have an extensive summer maintenance program as well as a 5-year plan to mitigate the local effects of global warming on our trail network. I have overseen expansions to our parking facilities, extensive road improvements, and the construction of new club buildings. Specific focus has also included development of safety infrastructure during my tenure as President. The club has installed new emergency equipment cache’s in multiple locations in the backcountry as well as an overnight alpine emergency shelter. You can check out a great video of the emergency shelter install HERE. We managed to design, get approval, fabricate, and install all in one season. The team involved of good friends and amazing volunteers made it a special project for me, and a lot of fun!

In general, a typical season with the club includes overseeing the overall direction and priorities of our organization, working through conflicts, liaising with our grooming contractor, chairing meetings, working with stakeholders on grant funding, or dealing with tickets/terrain violations. There is also summer trail maintenance and improvements, safety infrastructure, recruiting new volunteers, being the spokesperson for our organization if there is an incident. I would have a hard time guessing my total hours contributed for a season as they can vary greatly. Some days it can be up to 4 hours on emails and phone calls. I would estimate a minimum of 6-8 hours and rarely over 40 hours a month.

Q: That is a pretty diverse workload. How do you keep it all in order and running smoothly?

I would like to stress that my role as president is significantly supported by our one superstar volunteer Ken Mitchell. Ken is a retired accountant and came in to the club and completely turned around our financial and organizational situation. He was an absolute superstar on getting things done and my role as president would require a much larger time commitment than I was personally capable of without his amazing support! He recently retired from the club and we are currently creating a paid operations manager position to cover much of his work and some of mine.

Q: What kind of volunteer efforts are needed at the Powder Mountain Snowmobile Club right now and how can people get involved?

I would say what is most needed at the club right now would be for some people that are perhaps retired with a little bit more time on their hands to get involved. The volunteer landscape is so challenging here because so many of us are just barely scraping by and already working fulltime or multiple jobs. The cost of living in my area is so dramatically unaffordable that young people are not secure enough to devote as much free time as a club like ours might require to continue operating. This cost of living also produces a particular challenge in that a huge portion of our members do not even live in our community. 70%+ of our membership lives 45 mins to 2+ hours drive away. This limits our member volunteer pool for local jobs dramatically. When we had single time job tasks where people could just show up once and help fabricate part of an emergency shelter or club structure we had people come from as far away as 3 hours drive to come contribute a weekend day to the club. This was amazing, but not something that can be repeated constantly.

Q: Thank you Ryan for all your efforts out there! What keeps you going as a volunteer with the Club?

What motivates me to keep volunteering with the club is the sad situation of “if not me, then who?" If I did not take on the role I did, there would be no one running the club. If I did not get involved in the land management issues we very well may have lost some critical areas to our sport, and after those were gone more were on the chopping block. The situation has improved, and we now have some amazing directors within the club, one of whom is likely going to take on the president role next season. But I intend to continue my role with land management for the sea to sky region, and the summer road work within the club.

We are also working towards making volunteering with the club more fun and casual with the hiring of an operations manager. I want club volunteers to only commit to jobs they actually want to do, instead of guilting people into doing things they don’t want to do or the club will be in trouble. Next season with the Powder Mountain club will see shorter meetings, a focus on more club events (hoping COVID doesn’t tank this again), and a focus on having fun doing cool things for the club. I think this will be great for the long term health and sustainability of the club and our sport locally.

We would like to thank Ryan, the Powder Mountain Snowmobile Club, and all the diligent volunteers across the province who give so much of their time and energy to help improve the BC snowmobile experience for others. Have a volunteer you would like to recognize? Send us an email nmatei@bcsf.org.