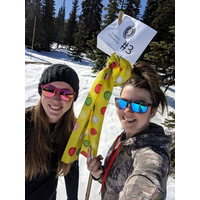 The Fernie Snowmobile Association will be hosting the second annual Fernie Gumball Adventure Challenge on March 21, 2020. What started as a little competition between friends is now Fernie’s biggest sled event! Teams (4 riders per team) have six hours to find checkpoints and complete a variety of skills challenges to earn points. The event involves navigation, strategy, skill, great costumes, and a bit of luck to win. Riders can expect the Gumball course to be set over several hundreds of acres of varying backcountry terrain accessible via the groomed trail network. $100 entry per team. Winner takes all.

“The event was created and designed to really just be a great day out on the snow with friends. Of course, nothing is better than a little rivalry and heated competition to spur you on” says Event Organizer Nicole Matei. Last year’s inaugural event was won by Team Sasquatch who generously donated their winnings to Avalanche Canada. Four of the ten checkpoints spread across the Coal Creek, Morrissey, and Corbin riding areas included points challenges such as avalanche rescue, survival, first aid, and problem solving. “It really has nothing to do with speed or your technical riding ability” continues Nicole, “If you can function well as a team and employ some creative strategy you can totally win”. Second place last year went to Team Dirt Squirrel who earned major points for sportsmanship when they tandem rode a competing team to the next checkpoint after members blew both a track and engine during the event.

The Fernie Snowmobile Association has been the organized voice for snowmobiling in the Elk Valley since 1990.  As a backdrop for world class outdoor opportunities, Fernie, BC attracts recreationalists from around the globe who contribute to our eclectic Rocky Mountain culture. Sledders, snowshoers, fat bikers, skiers and snowboarders all utilize over 160 kilometers of FSA maintained trails and three-day use cabins as gateways to their mountain adventures. Snowmobiling’s growing popularity creates vibrant recreational experiences for residents and tourists alike, jobs in support sectors, and revenue to local businesses. According to the recent  Economic Impact study released by the British Columbia Snowmobile Federation, Snowmobiling contributed 62.9 million dollars in economic output within the Kootenay Rockies region last year alone.