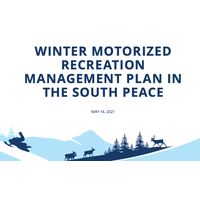 The BC Snowmobile Federation (BCSF) and our member clubs participated in developing the South Peace Snowmobile Advisory Committee (SPSAC) Recommendation Report that was delivered to the Province in February 2021.  This report was a culmination of over 400 hours of time and $20,000 in BCSF member funds.   We stand behind the recommendations of this report and are submitting this report in its entirety as our response to the draft management plan that is currently circulating.  We request that the Province refer to the maps in our report that provided for the protection of 92% of occupied habitat in the South Peace and allow the members of the SPSAC to be true partners with you in Caribou Recovery.

The SPSAC was tasked with finding a balanced approach that supported caribou recovery and continued snowmobile access.  The SPSAC focussed our recommendations on occupied habitat and included a core principle for Adaptive Management whereby public access is adjusted seasonally or temporarily when caribou are not present. This allowed for the communities to continue to grow snowmobile tourism without impacting caribou recovery.  Snowmobiling does not alter habitat, there has been no evidence of a snowmobile trail leading to a predation event in the South Peace, and today the collar data collected by the Province provides no evidence of habitat abandonment due to snowmobilers.

In addition to submitting our report in its entirety we are also submitting the following direct comments on areas that the Province has not addressed:

These areas must be established as recreational polygons and include the access trails, the grandfathering of existing cabins, and approval for new shelters or parking infrastructure required as part of the enhancement funds.   The Province should then enter into Partnership Agreements with the snowmobile clubs in each community to ensure the continued management of these areas long-term for public benefit.   Without this establishment of the entire polygon there is no legal recognition on the landscape of our usage and we will see our remaining areas further eroded through other land planning processes.

The British Columbia Snowmobile Federation does not support the current plan as circulated with sentiment echoed by the eight thousand signatures collected by the public. The Province’s draft plan has taken the precautionary principle and used a long planning lens with no consideration of the secondary objective, which was for snowmobiling to remain viable.  The SPSAC focussed on creating a comprehensive plan reactive to where caribou are and adapting public access regularly to maintain separation as herds grow and habitat usage changes.  The Province’s plan, however, is to apply a blanket closure of lands to the public whether caribou are present or not, and use punitive means to gain compliance. What the Province’s plan fails to acknowledge is that, according to the science, snowmobiling is considered a low threat to the herds and should only be managed where access is considered pervasive.  In the South Peace, on today’s landscape, the number of riders is low and spread across the region which prevents snowmobiling from being considered pervasive in any one area.  With this plan that will change.

It is our position that the members of the South Peace Snowmobile Advisory Committee diligently completed the work that was requested of us in the Terms of Reference and now ask the Province to follow through and review that work to ensure that quality snowmobile opportunities remain.  Closing 1 million hectares completely to recreational snowmobiling in the South has not provided any improvements to the herds but has directly impacted the economy of many communities and provided much financial burden to snowmobile clubs that are now trying to manage a growing sport with much less available terrain.

This plan will not be successful without the support of the BC Snowmobile Federation, the snowmobile clubs, the riders, and the communities they support.  So we again ask the Province to follow due-process: review the recommendations forwarded in the SPSAC report, and implement the plan presented outlining the protection of  92% of occupied habitat with a strong adaptive management principle establishing the clubs as partners.  This collaborative effort will allow us to stand with you in support of your work and assist the province in the implementation of a successful caribou recovery initiative in the South Peace.